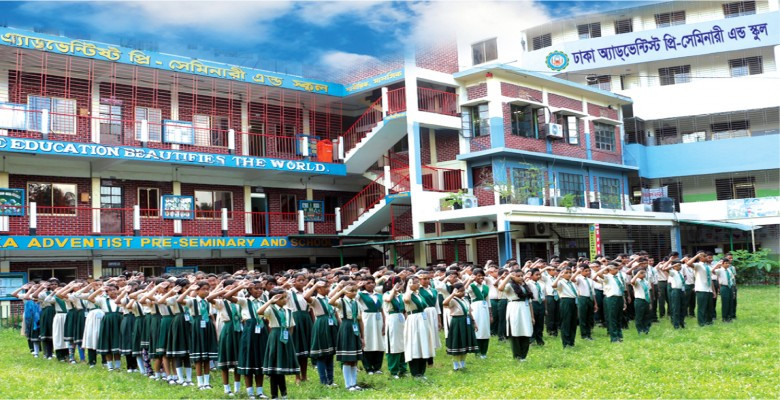 Dhaka Adventist Pre-Seminary and School (DAPS) is a school situated west side along the highway of Mirpur-1, in Dhaka City.  Before it was used to be called as Dhaka Adventist Church School. It is inside the campus of Bangladesh Union Mission Headquarters and is attached to Dhaka Church Building. It operates a computer lab providing literacy to school children. It has a small library and some periodicals, which provide reference sources of students and teachers.

Its inception started in 1970 as a multi-grade school (Benjamin Raksham was the first teacher) with 4 indigenous workers’ children at BAUM campus, Dhaka.  It didn’t last more than a year due to war that followed in 1971.

In 1973 Elder Ronald M. Neish became BAUM president and felt the need of a church school in Dhaka for workers children. In 1976 Elder David H. Skau, president of Bangladesh Union Mission of Seventh-day Adventists launched a vigorous plan for a new church school in Dhaka City, which was a long-felt need for an Early Childhood Adventist Education of our SDA workers’ and laymen’s children. By the end of 1976 all preparations were completed and  a long-awaited expectation was fulfilled when the doors of Dhaka Adventist Church School were opened for the first time on January 2, 1977 with 17 students enrolled in Nursery, Kindergarten, Grade 1, and Grade 2. Mrs. Millie Das was appointed as the first principal of the school and carried on this responsibilty until June of 1986. Mrs. Kathy Skau assisted her for a short while in phonics on a part-time basis.

The school was housed in one of the Sabbath school rooms of Dhaka SDA church building, in the premises of the Union headquarters in Mirpur and was operated under the umbrella of the union administration with the Union Treasurer serving as its board chairman.

In 1978 the expatriate home school was moved from Gulshan and merged with Dhaka Adventist Church School. A second Sabbath School room was added to the school facility. Some combined classes were taught by Mrs. Judy Johnson (music class) and Mrs. Eleanor Jackson (art class).

The reputation of this model English school staffed by talented, dedicated, caring and hardworking teachers, and enrolled with cooperative students had helped streaming in an increased number of students each year. We had to decline many applications for admission due to lack of space in the school. The church yard was used for classes as enrollment further increased; we had to use the church mothers’ room eventually. We found ourselves using five rooms in the church.

In 1982, Mrs. Muriel McHenry, Director of Bangladesh Christian School Sponsorship (BCSS), had a vision for a separate school building to provide better education facilities to our students and teachers. In collaboration with the Union Education Director, DAPS Principal and BCSS Director, a proposal was written, a blueprint was prepared, land was marked off, and a fund-raising work was started with The Quiet Hour.

In 1983, the groundbreaking took place for the school when Elder Paul A. Gordon, Vice President of Adventist Historic Properties, Inc., came on an itinerary to Dhaka from the General Conference (USA). On November 14, 1984 Elder Neal C. Wilson, president of the General Conference, (USA) came to Bangladesh on two-day in itinerary and laid the foundation stone of the proposed new building for what is now, Dhaka Adventist Pre-Seminary and School.

In August 1985, Dr. Ottis C. Edwards, and Mr. Ian E. Grice, President and Treasurer respectively, came from the Far Eastern division office in Singapore and visited the school, which was still located in the church building. Dhaka school students presented a special welcome program. The division officers were happy to see our building plan.

The Lord blessed Mrs. Muriel McHenry as she did the fund-raising through The Quiet Hour. By 1985, most of the funds and commitments were insight for the construction of the new building. The year 1986 was a good number of students’ enrollment of 90 children. More teachers were hired. Between 1987 and 1996, many dedicated principals and teachers continued to work for the development of the school.

In the years 1996-1997, the school got the general self-supporting status under the leadership of Sheba S. Baroya. Since then the school started to give appropriation to the Bangladesh Union Mission for land, electricity, building security, and guidance.

In the years 1999-2000 the 2nd floor was made at the time of Vilma Halder with its own fund. In 2010 DAPS started to build a new high-rise building, under the leadership of Rongten P. Bala. He left for Africa as a missionary worker the following year. Then Bilash Sikder was appointed as DAPS Principal. Bala also started the primary activities getting the junior school status from the Government. Afterwards the new principal Bilash Sikder and Treasurer Anukul Ritchil guided the school to achive the status of Primary and Junior School Certificate (PSC & JSC) and lateron to Secondary School Certificate (SSC). Now DAPS is recognized as a High School. Between these times DAPS new building completed up to 9th floor including staff residence.

In 2016 the school is having 1570 students as of September from play group to class X, and 55 dedicated teachers are nurturing these students, blooming flowers to bloom for the world and the world to come. Thus God has been blessing and taking care of His institution to extend His territory to glorify His name.  Beginning of 2012 BAUM and DAPS administrators felt that how to utilize the empty class rooms space during the afternoon time.  After the discussion of the ideas, BAUM administrators and DAPS leaders came up with final decision to open an English version program in the afternoon. Under the leadership of Bilash Sikder in 2013, English version Program started from Play Group to KG in the afternoon session.  English version program became popular day by day to the Guardians. In 2020, total English version enrollment is 850 (Play Group to Eight).